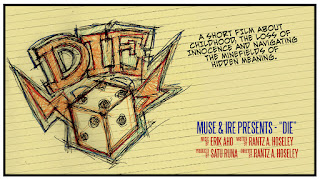 PLEASE NOTE: Send HEADSHOTS ONLY to the ADDRESS BELOW. If we want you to audition for one of the roles, we will email you with instructions to do so. THANK YOU!

Synopsis:
“DIE” is a short film capturing the moment when a young boy’s fascination with tattoos and scribbling designs on his school papers leads to a dramatic confrontation with his father and school principal. This unexpected conflict leads to the boy realizing that the world is much more complex, complicated, and layered than he had ever imagined.

[JIM ROBERTS] [MALE, 35-45, CAUCASIAN]
[Tall, with physical presence, sharp features framed by longish hair. Once handsome, his good looks have been obscured by a hard life of physical labor].
A single parent who resents his blue-collar existence. Angry and embittered, intelligent, and charming. These warring aspects of his personality reflect in how he interacts with those around him.

[WILLIAM ROBERTS] [MALE, 11-13, CAUCASIAN]
[Slight of build, with unkempt shaggy brownish-to-blond hair, and brown eyes.].
He is bookish, studious, and creative. A quiet kid who makes himself small and invisible in the presence of his father. He enjoys school and the positive feedback he receives from the adults there, so a moment where he has conflict with both his father and the principal is deeply upsetting for him.